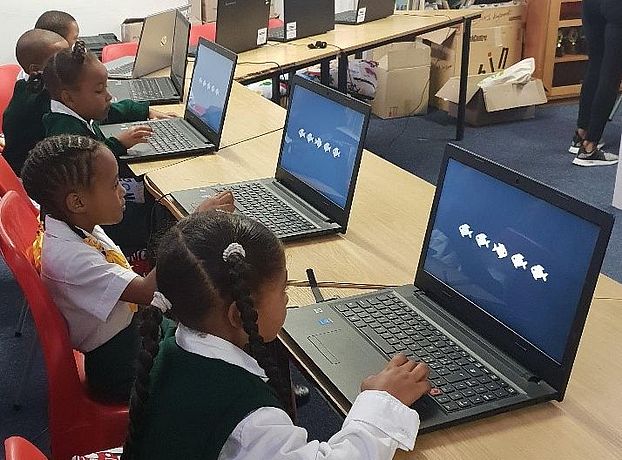 News from the KaziAfya project

Executive functions (EF) are understood as basic neurocognitive processes involved in information processing as well as language development. Accordingly, the first years of schooling are also seen as a critical phase of cognitive development in which EF such as information processing and inhibitory control is still developing. EF are thus essential for learning and accordingly correlate with academic achievement. Past research suggests that a healthy and balanced diet and regular physical activity (PA) are important for optimal cognitive development. Data on children's cognitive development are poorly available in low-to-middle income countries, including South Africa. The aim of the interdisciplinary, cluster-randomized controlled KaziAfya  study was to conduct a school-based physical activity and micronutrient intervention over two school years with research partners from South Africa, Tanzania, and Côte d'Ivoire.

In the present study, data from the South African cohort were analyzed after the first intervention phase. Here, we specifically addressed the question of whether the combination of physical activity (PA) intervention ( KaziKidz ) and multimicronutrient supplementation (MMNS) had a greater impact on cognitive and academic achievement in primary school children, compared to the respective single intervention and placebo condition. Children aged 6-12 years from 4 schools in a South African peri-urban area were randomly assigned to one of 4 intervention groups: (i) PA + MMNS, (ii) PA + placebo, (iii) MMNS, or (iv) placebo. Cognitive performance was assessed with a computer-based test (Flanker task). Academic performance was assessed by end-of-year school grades. In addition, the children's nutritional status was calculated as a possible influencing variable by anthropometric measurements. All measurements were taken immediately before the start of the intervention in April 2019 and again in September 2019.

A total of 932 children (49% girls) aged 8.42 years (± 1.94 years) participated in both studies. It can be observed after the end of the first intervention phase that the children's cognitive performance improved in all four groups and did not differ significantly from each other. It can be assumed that age-related development and the learning effect of retesting had a greater influence on cognitive performance than the 12-week intervention. Likewise, academic performance did not show a significant advantage of the combined intervention compared with the placebo group. Rather, the wide variation across schools and classes demonstrated that academic achievement, particularly in disadvantaged regions, is determined by other, out-of-school influencing factors. The results of the study indicate that health interventions known to have a positive impact on cognitive performance in Western and high-income countries do not readily translate to elementary school children from low-income and marginalized residential communities.